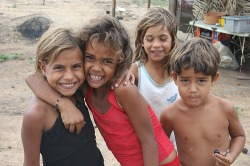 BRAZIL: Living on the edge

Poor Brazilians find the wait for their piece of this vast country can be too
much to endure.

SAO FRANCISCO DE ITABAPOANA, Brazil - The gritty flip side of Brazil's
remarkable agricultural expansion can be glimpsed along a dirt road at the far
end of Rio de Janeiro state.

At the Madre Cristina Camp, 60 people have been living for months in shacks made
of vinyl sheeting and palm fronds. Wood-burning stoves are fashioned from mud.
Men break the soil to harvest manioc, a starchy, radish-shaped tuber from which
Americans make tapioca. Children have no toys. One young girl hugs a textbook
she had just gotten at school.

All are waiting for the government of President Luiz Inacio Lula da Silva, a
former labor leader who worked his way up from poverty, to grant them the
equivalent of 24 acres a family, expropriated from holdings deemed
"nonproductive."

Lula's governing Workers Party, recently reaffirmed in power with
the backing of the poor, has made land redistribution a priority. But his
government faces the difficult task of balancing the costs of appeasing the
landless with measures that help large-scale farms export huge amounts of
agricultural commodities.

The Brazilian Constitution permits the expropriation of land that is not being
used or that is turning out below-average yields. And unless the owner can prove
that the property serves a nonfarming "social" function, he can be forced to
give it up in return for 20-year bonds. It can be a drawn-out process complete
with court battles, even bloodshed.

For decades, Brazil has been a poster child for wealth disparity, with the
richest fifth of its population bringing home 30 times more than the poorest
fifth. Until neighboring Bolivia passed it, Brazil had the world's worst gap
between rich and poor outside of Africa.

Madre Cristina's residents want their piece of this vast South American country,
but many simply can't hold out long enough.

At first, the camp numbered 120 residents, said Renata Cruz, 24. Then 40 left,
and then another 20. Some of the residents are working as sugar-cane cutters
while they wait for their land.

"The problem is that justice is slow," Cruz said. "We'll get land one day. It
may take five years."

At any time, somewhere in the country, poor Brazilians like these mount
invasions of large private farms strategically targeted by their leftist
land-reform group, the Landless Workers' Movement, known by the Portuguese
acronym MST.

The workers, disciples of the socialist revolutionary Che Guevara, occupy
property until police or hired thugs expel them. According to the Catholic
Church-related Pastoral Land Commission, 1,379 people were killed between 1985
and 2004 in land-redistribution conflicts.

The 22-year-old MST has become the most organized of the groups that fight for
land reform, says Wendy Wolford, a University of North Carolina geography
professor who lived among MST members for a year.

Wait finally pays off for some

A few miles down the road from Madre Cristina is material proof that some land
seized by authorities eventually gets divided.

This land was expropriated, neighboring farmers said, because the last owner
acquired the property knowing that back taxes were owed but would not negotiate
with the government.

The lucky few farmers who have small plots must work the land for 10 years
before getting clear title, without which commercial credit is difficult to obtain,
and government aid is rarely quick. Government loans are available, but
red tape often delays them beyond planting season when the credit is needed.

There is a general perception among wealthy Brazilian farmers that the land
handed out is too small to support a family, and that inexperience and lack of
credit doom many to failure.

Carlos Alberto Figueiredo spent two years at a roadside camp before getting his
allotment.

"It was sad. I remember nights when it was raining and I couldn't sleep. We kept
moving the baby to another place to keep dry," the 42-year-old farmer said
through an interpreter.

"It's hard to live in a camp because nearby farmers refuse to hire you. You are
in constant fear of being expelled. Men from the Justice Department at one point
gave us two hours to clear out. So we crossed the highway and started a camp
there. There were a lot of police, so we couldn't resist."

Figueiredo was a baker before his desire to possess his own land became too
strong.

"I had worked hard but could never earn enough to buy land," he said. "Five of
my six brothers said I was crazy to have sold my bakery and joined MST. Only one
said I should follow my dream."

His wife became despondent over the sudden drop in their standard of living,
compounded by a precarious future, he recalled.

"At times, we almost divorced. But then she came around. But my friend's wife
left him because of the strain, then he himself gave up. We started with 220
families and we were 56 at the end. You have to have a strong will," he said,
adding with a smile: "Maybe I have a weak head."

Figueiredo was luckier than some. He had 11 horses and six cattle when he joined
MST. To support his family during the long wait for land, he sold some livestock
and was able to find work one day a week. By the time he was allotted 24 acres,
he was down to six horses and no cattle.

"My life today is the fulfilling of my dream to work the land. It is enough,
but I can't get any farm credit. For three years, we have been asking for an
$8,000 loan. I have pigs, chickens, two mares, two donkeys and I rent one
pasture to a friend. If I could get a loan, I wouldn't rent it out, but instead
buy some dairy cows and build fish ponds to raise tilapia."

They get their land, then what?

In the past three years, 320,000 families have been given 65.5 million acres,
according to the state agency handling land reform, INCRA. It estimates that
171,000 families are camping along roadsides waiting for land.

Various studies have tried to determine just how successful recipients are.
"Occupying land is sensational and uncomfortable, but the hard part is working
the farm," said Wolford, co-author of the 2003 book, Inherit the Earth: The
Landless Movement and the Struggle for a New Brazil.

Success often depends as much on a farmer's ability to grow quality crops as on
his proximity to markets and the amount of skilled political leadership within
the settlement, she said.

Overall, the attrition rate is 20 percent, with somewhat fewer failures at MST
settlements, Wolford said. Generally, they do better in southern Brazil, where
roads and support services are more developed.

"What the studies don't take into account is how much better off they are now
compared to how it would be if they were still landless," she said.

Whatever their successes, the movement's popularity has wavered.

Landless activists got a collective black eye on International Women's Day in
March when 2,000 members of an MST-fostered group, the Movement of Peasant
Women, invaded an experimental tree farm, uprooting 1 million eucalyptus and
pine seedlings and destroying a lab. Damage at the facility owned by a giant
pulp producer was put at $20 million. MST, which opposes the proliferation of
non-indigenous eucalyptus trees as harmful to the environment, defended the
action.

Isabel Barros Goncalves, 52, an analyst at the lab, said 19 years of work was
ruined. The irony that female militants wrecked a female researcher's labors was
not lost on the Brazilian news media. Three TV networks were invited to film the
action. Their footage, followed by emotional interviews with Goncalves, outraged
the public and added to the generally negative coverage of the landless
movement.

Zero Hora, a Brazilian newspaper, called the attackers "barbarians" and
"terrorists." One newspaper quickly coined the word "ecotage" for ecological
sabotage; another publication likened the looting to the excesses of the Spanish
Inquisition.

Unsurprisingly, MST is Brazil's most active grassroots movement and a
lightning rod for criticism over some of its tactics.

Francisco "Xico" Graziano, a member of the national Congress who briefly headed
the government's land-reform agency under a previous government, has called MST
an "authoritarian guerrilla organization."

But Miguel Carter, a professor at American University in Washington, D.C.,
asserts that the movement is a democratizing force. Over the years, MST has
helped create 1,200 agrarian settlements for 350,000 families, and set up 88
farming cooperatives and 1,800 schools, including a university.

Carter also noted what has happened since an MST land seizure in 1985.

MST members in Pontao, a town in Rio Grande do Sul state, won an election in
2000 with 56 percent of the vote after stopping opponents at gunpoint from
bribing voters with free truck tires. This, Carter said, showed that MST could
succeed democratically, albeit with a "tough touch" that's a legacy of its
origins.

"The lesson learned in the last 25 years of landless mobilization is simple:
Pressure the state through public activism, and then negotiate the best deal
possible," Carter said. "Afterward, strive to obtain the next item on the agenda
through another round of public activism and bargaining."

No money for condoms

A few miles from Dandara dos Palmares, a group of small farmers was helping a
neighbor spread fertilizer by hand. Some owned twice as much land as the nearby
MST members, a few even more.

They were by no means rich, as evidenced by a rusted, 50-year-old tractor that
one owned and lent to his friends who had no mechanized implements.

"Land reform is good for a lot of people but there are also ones who don't
deserve the land, and it's easier for them to get credit and some just turn
around and sell their plots," said Carlos Alberto Barretto, 49.

His criticism, by no means rare, was not shared by all of his neighbors.

"They are hard workers and they don't sell their land," said Amarilson Alves,
referring to the MST members down the road. Alves, a 34-year-old sugar-cane
farmer, started with 5 acres, inherited 12 and expanded his holdings to 65.
"Not all of them will succeed, but I think about a third will."

Figueiredo, the former baker, wants to be one of the lucky ones.
Interviewed on his small farm, Figueiredo said he attended two aquaculture
courses given by MST.

At one point, a brother loaned him four dairy cows and he used their milk to
make cheese. But his brother eventually took the animals back.

"We just live one day at a time," Figueiredo said. "I haven't bought clothes for
my children. We depend on donations from church groups. These pants and shoes
came from my brother." Some in the family wore brightly colored T-shirts and
baseball caps imprinted with the names of local politicians, a material benefit
from this year's national elections. "My brother gave me a cellphone, but I have
no minutes left and can't afford more."

His wife has given birth twice since they moved in, and now they have five
children. Government clinics dispense free condoms, but only a few at a time,
and the facilities are hours away.

"I don't have money for contraceptives, so we may have more children," he said.


﻿This article was written during a travel fellowship granted by the International Center
for Journalism and the Ethics and Excellence in Journalism Foundation.