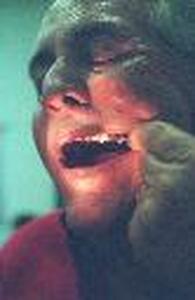 Mouthful of miracles in Texas

WEATHERFORD, Texas - Never before had New Life Community Church seen such revival crowds, night after night, week after week. Previous revivals lasted a week at best. But church officials said the one that began Sept. 26 attracted worshipers who filled the 200-seat sanctuary five nights a week for 10 weeks.

The church, which collected offerings at each service, said 8,000 people from across North Texas and six states had
attended the revival at the small neighborhood church about 35 miles west of Fort Worth and has a regular membership of 250.

There was something different about this revival, which resumed on the weekend.

It wasn't the spirited contemporary Christian music or the rousing sermon. Nor was it the joy and uncontrolled crying when worshipers were touched or lightly blown upon by a visiting evangelist or a church elder -- now a
common feature of Pentecostal revivals and known as being "slain by the spirit."

What set the Weatherford services apart was the insistence of dozens of people that gold teeth, crowns, plates, bridges and bands had materialized in their mouths afterward.

The Rev. Don Connell, pastor of the church, said people have told him that they found gold crowns on their teeth where less expensive dental work had been before. "The gold part is growing," said Jim Freeman, 65, a Weatherford rancher, pulling back a corner of his lip to reveal a gilt-colored filling. "It just happened."

There were also reports of healing. A church elder said a shorter leg grew to the length of the other. A woman said her back pain disappeared. But gold teeth are the latest revival twist, a phenomenon that was first
reported in Argentina during the 1980s and spread to Mexico, South Africa, Canada and Britain, according to Canada's Christian Week newspaper. Now it has hit the U.S. circuit.

Eldin Villafane, 58, a professor at the interdenominational Gordon Conwell Theological Seminary in Boston and a visiting professor at Harvard University's School of Divinity, said he encountered the phenomenon more than
10 years ago at Spanish-language revivals in the Northeast. The claims fade after several years and then reappear, Villafane said.

"I've heard a few cases where there's some confirmation, but much of it is hearsay," Villafane said in a telephone interview. "This doesn't surprise me. Miraculous claims are part of the whole Christian lore. The important thing is not whether it is real or not. What's important is the symbolic value to the people. They see the hand of God somehow intervening in their daily life."

But, he cautioned, the gold-tooth phenomenon "can be manipulated, exploited to promote a pseudo faith. At the same time you can say the same about anything to promote a church."

Connell said that the popular revival series has had no significant impact on church membership and that the cash offerings, split 50-50 with guest evangelist Larry Taylor, barely cover expenses.

Gold teeth suddenly stopped appearing in the Canadian coal-mining town of Lethbridge last spring after a religious broadcaster made it known that he received a "miraculous" gold crown, and then checked with his dentist. Dr. Jack Sherman informed Dick Dewert that he had fitted the crown 11 years before. Dewert owned up to the fact in a letter to the local newspaper, becoming the object of public ridicule.

The local newspaper, The Lethbridge Herald, outlined the story in gilt and ran the headline, "Fool of Gold," Dewert said in an interview. "I was terribly embarrassed. I put my sunglasses on and drove a different way to the office each day," he said. A chastened Dewert said he has become more wary of such claims. But when asked whether be still believes in miracles, he replied, "Yes, I see them all the time."

In Weatherford, the talk of gold teeth has become a sensation.

"My wife has perfect teeth, and we wanted her to have a mouthful (of gold teeth) to prove God's power," said Charles Ford, 57, a car salesman who recently moved to Weatherford from San Angelo in West Texas. "We
prayed for her, but I got the gold tooth -- totally off the wall. It's weird, wonderful weird."

After a service, Connell said, some people reported similar gold crowns only to remember that they had gotten them in a dentist's chair years earlier. Still, most are the work of God, he said. "They're beautiful teeth, absolutely beautiful," said Connell, whose congregation is affiliated with the International Church of the Four Square Gospel, founded by evangelist Amy McPherson. "The question is, Why gold teeth? Why not perfect health? We just feel God is touching and saying, 'Have a little gold.' It's a sign."

"I'm not saying it's pure gold" said Mary Carter of Colleyville, who said she received gold dental work. "But it sure does glitter and shine. No one knows what this is all about, and no one can explain why. But it came from
God, from Jesus."

At some Canadian and US. revivals, gold flakes were said to have materialized along with the gold teeth. A geochemist at the University of Toronto analyzed such a bit and found it to be gold-colored glitter, made of plastic film.

A gold speck found at a Dallas revival melted when heated, said Ole Anthony of the Trinity Foundation, a nonprofit organization that investigates alleged excesses by televangelists. But there were no general gold dust claims at the Weatherford revivals, although Carter said she picked up a minute particle on a piece of tape. Church member Jerry Stanley claimed there had been other gold dust sightings.

Dentists remain among the skeptical about the assertions that crowns have turned to gold in the Parker County seat, famous for its peach crop and cutting horse ranches.

"I have no explanation for what's going on," said Dr. Paul Phillips, 72, who has practiced dentistry in Weatherford for 32 years. "It just doesn't make any sense. For a tooth to mutate into gold, that would be alchemy."

"What's the deal?" asked Thomas Novak, a Chicago-reared dentist who has been in Weatherford for three years. "If he's going to change it to gold, why doesn't he change it to tooth? I guess I'm a little bit cynical. I would
want to know what kind of cement God is using to keep that gold in." 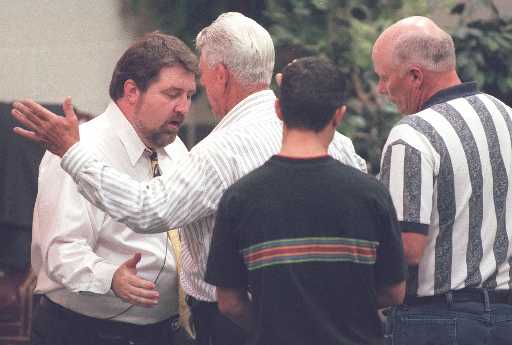