LUCAS DO RIO VERDE, Brazil — When Paulo Sergio Franz guns a mud-splattered pickup past a spread of white Brahman cattle and wide expanses of newly planted soybeans, it becomes evident this is no ordinary family farm.

Mano Julio Fazenda, which Franz owns with an older brother, Marino, is diversified like farmsteads that once dotted the American landscape, with portions committed to several crops, hogs, beef and dairy cattle.

But this is the Cerrado, a vast savannah of semi-wooded grasslands in west-centralBrazil where an all-or-nothing pioneering spirit is strong. And the Franz brothers, who came to the region dirt-poor, are now proprietors of a remarkably integrated megafarm. Their energy and resourcefulness, combined with cheap labor and land, help to explain how, in a few short decades, this South American country has transformed into an agricultural superpower, albeit one balanced on a highly fragile foundation.

And despite an economic downturn that has hit many farmers in the past 18 months, there’s no denying the lasting progress. The United States, although still the largest soybean producer, lost its place as the top exporter for the first time when it was surpassed by Brazil, the U.S. Agriculture Department estimated in February.

With 170 million, Brazil has the world’s largest beef cattle herd and became the No. 1 beef exporter in 2004. It’s also the leading international supplier of coffee, orange juice, sugar, ethanol, tobacco and chicken. Pork might not be too far down the road, officials say. Brazil ranks fourth in cotton exports. Overall, the value of the country’s agricultural exports has grown 20 percent a year since 2000, according to the USDA.

"Should Brazil Give You Heartburn?" asks a sobering PowerPoint presentation by the Iowa Farm Bureau, detailing the country’s runaway expansion. To many American producers, the answer could be a yes.

The family processes its own soybeans, cottonseed and corn as feed, and delivers it to the family’s 4,500-head cattle feedlot and to nearby poultry farms. The poultry farms are expected to expand to supply a sprawling 500,000-birds-a-day plant being built by the Brazilian meat giant Sadia in Lucas do Rio Verde, 56 miles to the east. The Franzes are also planning their own 8,000-sow hog farm.

"To my knowledge, nowhere else on the planet incorporates all the facets of this diverse agricultural production on such a large scale on a local level," Kory Melby, a Brazilian-based consultant with a Minnesota farming background, said of the Franz operation, which also includes a 1,000-acre eucalyptus plantation and bio-digesters that transform hog waste into fertilizer.

Although the brothers are years ahead of neighbors, yields of key crops by Brazilian farmers match those of the United States or are produced at lower cost.

"I think producers of most crops need to be concerned about what’s going on inBrazil," said Mark Waller, an economist with the Texas Cooperative Extension service who has visited Brazil. "The potential for acreage expansion, the potential to produce crops and livestock cheaply and get them into the export market is immense. And if they can get [animal] diseases under control and their infrastructure improved, they will be a major, major competitor in the future."

There’s no denying the potential. The Dutch-owned bank, Rabobank, estimates that an additional 173 million acres are available for cultivation in the Cerrado, a region larger than France or Germany.

"The American Midwest has had that position, but it’s run out of land. Only about 7 percent of Mato Grosso is being cultivated, and about twice that is pasture for cattle," said Robert Resnik, an American economist who went to Brazil as a banker and stayed as a business adviser to large-scale farmers like the Franz brothers.

Deforestation in the Amazon region and the Cerrado has prompted some environmental groups to threaten a boycott of Brazilian beef and soybeans. The government insists that a portion of new farms set aside a hefty percentage of wood-covered land. But using cleared land for new feedlots could weaken the economic need to exploit virgin rain forests.

"As they begin to put more cattle in feedlots, that doubles the amount of cropland without cutting a single tree," Resnik said.

No longer seen as wasteland

Remarkably, the 502-million-acre Cerrado region — pronounced seh-HAH-doh and meaning "closed" — had been considered a wasteland for centuries. In the 1950s, A. Colin McClung, an American scientist, discovered that lime from local deposits combined with fertilizer would lessen the soil’s acidity, counter toxic levels of aluminums and make fertile nearly a quarter of Brazil’s land mass.

Brazilian plant breeders then created soybean varieties that thrive in the tropical climate as well as hardy forage grasses for cattle.

In 1970, no soybean was planted there; today, the region grows 54 percent ofBrazil’s mammoth production.

The Franz brothers bought land passed over by others.

"They laughed at us, calling us ‘dumb’ for buying swampland. Today it’s worth five times what we paid," said Paulo, who had spent several years on Iowa hog farms through an international farmers-exchange program.

Like other producers, they were quick to adapt technology and large-scale efficiencies. They also took advantage of cheap land and low-cost skilled labor.

In addition, farmers benefited from favorable currency-exchange rates, which created 10 percent- 20 percent profits some years just by buying seed and fertilizer in Brazilian currency, then selling harvests in U.S. dollars.

Economic reforms 20 years ago laid the groundwork that ended curbs on exports and scaled back government intervention in agricultural markets, Brazilian economists say. Freed from state marketing boards and export taxes, production of major crops doubled between 1970 and 1990.

Still lacking were commercial banks willing to bankroll producers, said Gervasio Castro de Rezende, a U.S.-trained economist at the Institute of Applied Economic Research in Rio de Janeiro. Multinationals like Cargill and ADM stepped in, not only to create logistical systems for seed, fertilizer and harvested crops, but to fill a void by advancing credit to producers.

Individuals also saw an opportunity in the widespread need for farm loans.

Marino Franz, who arrived in the region penniless at 18, made his fortune by bartering fertilizer and other inputs for an eventual share of customers’ soybean crop and is today mayor of Lucas. His Grupo Fiagril, started with a $600 investment, now has the capacity to store 389,000 tons of grain and reported sales of more than $200 million last year.

The Franz brothers plant soybeans on 11,100 acres of their own land and on 8,000 more they rent, all of which they work with 60 full-time laborers and technicians who produce their own food. Unmarried workers live in a neat row of white-washed sleeping quarters across a lawn from a mess hall and the modest brick house Paulo Franz is building for his family.

"I want to be totally self-reliant; I don’t want to pay for electricity, nothing," Paulo Franz said.

After harvesting soybeans, the farm grows corn and cotton as second crops each year. That allows him to keep workers employed full time and raises the operation’s efficiency.

Then there’s the feedlot operation with 4,500 steers — recently down from 10,000 — run by a veterinarian and an animal nutritionist. This season, the farm began building 48 hog barns for its pork venture and planting tens of thousands of fast-growing eucalyptus trees for pulp. Eucalyptus will fetch more per acre than cotton in addition to earning carbon credits, a conservation investment tool created by the 1998 Kyoto Protocol, farm manager Ismail Gross said.

Cattle and hogs consume corn — grown at a loss because of low prices — and cottonseed. The livestock later will share soybeans with a $14.5 million biodiesel plant being built in nearby Lucas do Rio Verde by Grupo Fiagril that will process 209,000 tons of soy annually from next year.

Brazil has often been predicted as being about to fulfill great promise only to be derailed by an economic or political calamity.

And its current agriculture success is not as straightforward as it is often portrayed.

Imagine some of the world’s most efficient farms held hostage to 19th-century infrastructure: a large portion of the major "highway" leading to a key Amazon port is unpaved. Although Brazil is the size of the lower 48 U.S. states, it has one-thirtieth the paved roads and one-seventh the railroad tracks, and that of differing gauges. Thanks to the Amazon and its tributaries, Brazil boasts 20 percent more waterways.

Like other producers, Brazilian farmers are at the mercy of unpredictable international market swings, made more difficult by the growing momentum of environmental campaigns that want to restrict Brazil’s agricultural expansion.

An obstacle that would be foreign to U.S. farmers is a militant landless movement motivated by Brazil’s extremely unequal land distribution: The largest 1 percent of farms comprise 45 percent of the land, according to the 1996 Brazilian census. Movement followers invade and occupy farms deemed underutilized, citing constitutional guarantees that nonproductive land must be redistributed. The actions frequently prompt a violent reaction, and 1,379 people reportedly have been killed in the past 20 years. Cases of forced labor on some remote soybean farms also have hurt the industry’s international reputation.

Although the prospects of Brazil’s farmers remain strong, they have suffered painful setbacks in the past year that some liken to an economic tsunami.

The downturn, created by a double whammy of a strengthened Brazilian currency and lower commodity prices, triggered loan defaults and angry protests in March and April that blocked the major shipping routes for weeks with trucks and tractors.

Aside from those heavily into sugar cane — booming because of soaring demand for ethanol — few have done well since 2005 after almost a decade of steady gains.

Some farmers "have just quit," Franz said. "Those just starting out were in the worst shape. Others are buying cheaper seed this year, using less fertilizer, so yields may be lower." Farm equipment dealerships have closed down in some areas.

The protests forced the government to offer subsidies to soybean farmers — even after winning a historic victory against American cotton subsidies two years ago at the World Trade Organization and after official pronouncements that its farmers need far less support to be competitive. But the payments came too late for many.

Farmers benefited from buying fertilizer, seed and pesticide in reais, which dropped 300 percent in value in a four-year period, while selling in U.S. dollars. But that changed when the real sharply appreciated in value from 2004 to 2005 and the dollar dropped, Rabobank said.

"Our production costs were high, and we lost 50 percent of our buying power," Franz said.

A group of 47 agribusiness firms sued by farmers said they were ready to renegotiate the loans but not without guarantees.

Is it all doom or just one step back after nearly a decade of solid progress?

Resnik predicts that the current crisis will be short-lived, saying: "I think we’re going through a downturn of cycle, but we should be coming out of it in the next couple of months."

Even with all of Brazil’s problems, a recent USDA analysis predicts the rate of its agricultural expansion "will be one of the world’s highest — 4.5 percent per year over the next 10 years, or about 1.8 million hectares per year."

Resnik agrees. "Basically, you are looking at what will be the breadbasket of the world," he said. 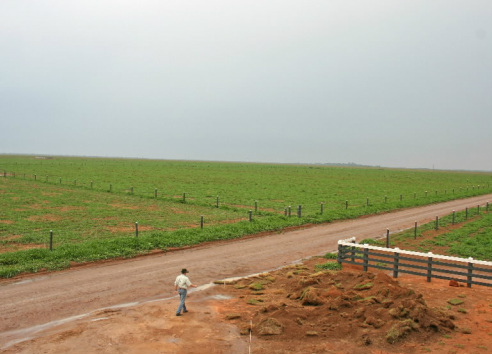 LUCAS DO RIO VERDE, Brazil – Paulo Sergio Franz walks along newly planted fields at his mega-farm in central-west Brazil, once considered a barren wasteland but now aims to be a major supplier of soybeans, cotton and beef. Like many, Franz came to the region poor. Photo by Barry Shlachter