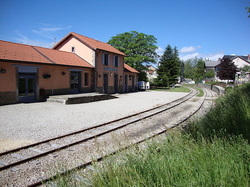 In the French heartland, a kindness for strangers
Le Chambon seeks little attention for the heroic efforts to save Jews during World War II. A visit
there enriches one's historical perspective as well as offering pastoral pursuits, including
mountain biking and golf.

LE CHAMBON-SUR-LIGNON, France -- Unlike Buchenwald and Auschwitz, grisly
monuments to inhumanity, this village is a place where something good occurred during the
Holocaust. Its people, of stubborn Huguenot stock, took part in the rescue of thousands of Jews,
all of them strangers, and brazenly told German and collaborationist French officials what they
were doing.

Just two hours away is Vichy, capital of the collaborationist government and a genteel spa resort.
For very different reasons, the two communities are reluctant to dwell on their respective World
War II connections.

More than 60 years after the Fall of France in July 1940, both are friendly destinations (though
rarely visited by Americans), with numerous and inexpensive activities -- worth a visit for
reasons beside their compelling historic legacies.

Describing their openness to outsiders, the Chambonais use the word accueil, which is translated,
inadequately, as "welcome" or "reception." But it means much more. Here it has encompassed
sheltering strangers threatened by tyranny, as the residents' own ancestors had been. This century,
it started with Spanish Civil War refugees in 1936.

Then, at no small risk to themselves, the Chambonais joined with neighboring villages to hide
thousands of Jews, smuggling many more to safety in Switzerland.

Remarkably, they never lied about their activities, openly telling French collaborationist officials
and German officers that they were providing refuge to Jews. When a Jewish child graduated at
the head of his class from primary school, his conspicuously un-Gaulic name was published in
the regional newspaper.

Sympathetic French police telephoned a warning before every raid but one, which was mounted by a
German unit. Eleven young men and their Protestant counselor were to die in Nazi concentration
camps after that raid.

"The village knew a couple of days in advance of the round-ups," recalls Hannah Liebman, a
Long Island resident whom I called before visiting Le Chambon. A German Jewish refugee of 18
when she arrived in Le Chambon, Liebman said that during the raids, "We were hidden with
local farmers."

No names were ever given. No records were kept. Like others saved, she doesn't know who to
thank.

"Almost everyone knew Jews were staying next door to the hotel where convalescing German
soldiers were billeted," says Rene Riviere, 69, a retired engineer. "But no one spoke. Of course,
we knew it was dangerous, but as children we didn't fully comprehend. It was a strange time."

I found Riviere with the help of Annick Flaud, who had studied in New Orleans, worked as an
international lawyer in Paris and then moved to Le Chambon to raise her sons. An outsider, she
lacks the locals' in-built reluctance to speak of the wartime heroics. She has taken it on herself, as
a member of a local history group, to meet with foreign visitors and tell the story of "the rescue."

Flaud's group has been given a small room across from the village elementary school. Here she
has fashioned a display telling the story of the rescue. It can be seen by appointment, arranged
through the friendly tourism office.

But it is easy to pass through Le Chambon, a village of about 2,800, without learning the
remarkable story of how it and 10 other communities of central France's "Protestant Plateau"
saved thousands of Jews -- some French, some foreign, all strangers.

The reticence of the Chambonais is apparently due to the ingrained reserve of these highland
folk, fearful that their wartime heroics might be misinterpreted and somehow exploited
commercially. Then there is the concern of exacerbating the longstanding jealousies between Le
Chambon and other villages that helped in the rescue.

The village has been honored in Yad Vashem, Israel's Holocaust memorial, but it has turned
down offers of monuments from the government and Jewish groups on its own land. Adds
Vincent: "What is embarrassing is the focus, the exaggerated focus, on Le Chambon, neglecting
the surrounding communities that did as much."

Less than a two-hour drive away is Vichy, whose name came to be synonymous with political
opportunism and treason. For far different reasons, the people of the genteel resort are equally
reluctant to dwell on the past.

Yet in July 1940, Vichy was mainly chosen as the seat of the collaboration not for any political
leanings but because it had 7,000 hotel rooms, a modern telephone system and direct rail service
from Paris. The community had no say in its choice as capital and lived under intense security.
Yet it bears the shame for the nation, which generally supported the Vichy regime during its early
years.

The Resistance forces, according to the most optimistic estimates, had the participation of no
more than 2 percent of the adult population.

Le Chambon has one marker, put up by a Paris-based Jewish group, observing its role. But the
town itself has done so little that a Canadian woman who spent six months here after the war
never heard about the rescue until she moved here permanently decades later.

Mayor Vincent has announced a $1.1-million plan to transform the old railway station, where
many of the refugees arrived from 1940-44, into a "center for welcome and tolerance." In
reaction, one-third of the city council resigned, partly to protest the proposed center that they fear
is aimed at boosting tourism by capitalizing on the rescue.

Vichy is equally at a loss about how to deal with the past.

No building carries an outside marker denoting its wartime role. The only easily accessible
reminder of its wartime importance is a carefully worded plaque on an inside wall of the Casino,
where the National Assembly gave Marshal Phillipe Henri Petain special powers in July 1940.
The marker sidesteps that historic turning point, citing only the vote for liberty by a tiny minority
of legislators.

Since the war, the city has worked to expunge any trace of Petain's embarrassing four-year
residency and to redirect attention elsewhere, pointedly renaming boulevards after John F.
Kennedy and Franklin D. Roosevelt, and another for the United States. But the head of the
municipal tourism office, a politically active physician whose home had served briefly as the
American Embassy, said last summer it was high time that each historical site be plainly marked.

However, there's still no consensus on the marker issue.

Twice a week, the tourism office does sponsor a tour that explains the still uncomfortable past. It
starts at the office, housed in the well-maintained Hotel du Parc, from which Petain governed the
southern portion of France that Germany did not occupy until 1944. But Petain's office itself
remains padlocked, thanks to a Paris-based association of admirers, which bought the suite.

Undamaged in war, little seems to have outwardly changed in Vichy, a city of 30,000. In the
central park, laid out in 1812, varieties of the unpleasant-tasting but supposedly healthful Vichy
water can be freely sampled.

Under the patronage of Emperor Napoleon III in the 1860s, the summer season attracted the
fashionable elite, transforming it into a "little Paris" with sidewalk cafes and an ornate opera
house. One can almost picture mustachioed men in top hats promenading with parasol-shaded
ladies as an impressionist painter splashed the light-diffused scene on canvas.

But the historic-tour guide then transforms the scene, pointing out hotels requisitioned as the
Interior Ministry or the German Embassy. A few blocks away is the Hotel du Portugal, where
guests might now learn that Gestapo officers once slept in their rooms.

Afterward, the tour guide, history student Frederic Touzin insisted that Vichy is not suffering
from collective amnesia over the war years. "In the minds of many French people, especially the
war generation," he explained, "the period is still too hard, too painful, to speak of."

Vichy and Le Chambon are a corner of France profonde, the "the French heartland," rich in
history, but with other diversions such as mountain biking, off-road driving, rock climbing,
horseback riding and golf.

In both communities, excellent food and good hotels -- much cheaper than in Paris or Lyons --
are abundant The two communities are summer destinations; Le Chambon is best avoided after
late July, when French vacationers swell the village from 2,800 to nearly 20,000. There has been
a chronic surplus of hotel rooms in Vichy, so booking at any time is no problem.

The gaggle of gastroenterologists, who wield enormous local clout, have kept the spas and hot
springs open only to people with such real (or imagined) medical complaints as indigestion and
rheumatism, not to tourists who just want to relax.

Some of the medical/political clique have tried to diversify Vichy's appeal by building a
sprawling sports complex with tennis, fencing and numerous other activities. An artificial lake
there offers wind surfing and sailing. The city also mounts a slew of musical events, including a
popular summer opera series.

Driving toward Le Chambon from Vichy, visitors can swing through Le Puy-en-Velay, a city
with medieval churches rising magically on basalt pedestals. To the immediate south is the
Huguenot stronghold where, in the 1870s, Robert Louis Stevenson remarked on the "natural
hospitality of the mountain people."

Stevenson set out with four-footed Modestine from Le Monastier-sur-Gazeille. The shared
adventure became his first bestseller, Travels with a Donkey, earning him enough money to sail
to the United States and woo his true love, Fanny Osbourne. Today the Stevenson Trail is
marked, well-mapped and regularly traversed.

After the war, Le Chambon did not abandon its tradition of caring. Refugees from Tibet,
Indochina and elsewhere were given shelter in the predominantly Protestant town. Such help also
was extended to Kosovo Albanians, but the mayor said that conflict ended before any could
arrive.