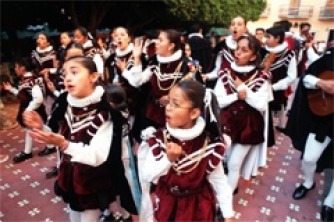 Tuna Colegiata Real de Guanajuato, one of a number of strolling
troubadour groups, is made up of children as young as 4. For a
bargain $6, you can follow the singers through the winding streets,
then receive a small ceramic flask of tequila cocktail to down
while listening to songs that range from medieval ballads to The
Impossible Dream (in Spanish).