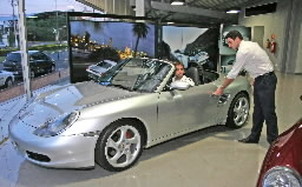 Life is sweet: Brazil's investment in ethanol has made sugar growers very rich
© Fort Worth Star-Telegram
November 2006
﻿This article was reported on a travel fellowship granted by the International Center
for Journalism and the Ethics and Excellence in Journalism Foundation.

The twentysomething buyer for a department store is not alone. Brazilians across
the country are snapping up new-model "flex" cars that use gasoline or cheaper,
sugar-derived ethanol, or a blend of the two.

This 150-year-old city of half a million, four hours west of Sao Paulo, has
disproportionately benefited from Brazil's newfound energy self-reliance,
reached this year. What Dallas and Houston are to the oil business, Ribeirao
Preto is to Brazil's booming ethanol industry, home to many of its biggest sugar
farmers and ethanol distillers, who have helped their country achieve energy
independence.

The vast majority of new cars sold in the South American country have flex
engines. And with ethanol about half the price of gasoline -- itself about 20
percent ethanol -- times are remarkably good for sugar-cane growers and refiners
of the alternative fuel. Some are vertically integrated, cultivating cane,
crushing it and distilling the juice into ethanol.

"It's a magic moment," said Wady Cecilio, director of a Chevrolet dealership
here, struggling with his English to describe how both his company and Ribeirao
Preto in general have been blessed. Sales are up 15 percent compared with a year
earlier, he said.

Gabriel Kasai, the 25-year-old owner of a lingerie shop who bought a mid-range,
Brazilian-assembled Chevy Astra sedan for $22,500, figures he'll save the
equivalent of $1,500 a year doing 10,000 miles with its "flex" engine if
the ethanol-gasoline price ratio remains the same.

Although some here are buying new cars to save money, others are spending the
bundles they've earned from the ethanol boom, Brenno Floriano said.

As chief sales executive for the city's Porsche dealership, Floriano is
constantly on the phone, reassuring sugar-mill owners and cane farmers about the
sports cars they've ordered from Germany despite a 120 percent import duty and a
$126,000 starting price.

"Two years ago, it was totally different. Soybeans and beef prices were up,"
Floriano said. Now those commodities are down and sugar is soaring because the
government wants more produced for fuel, he explained.

Notable donations to hospitals, cultural institutions and colleges from sugar
barons are conspicuous by their absence, residents grumble.
Instead, many are dashing headlong into accumulating luxury goods and expensive
vacation homes.

"There are the beach houses, private planes, the purchase of bigger farms, polo
ponies," Floriano said. "One sugar guy bought a helicopter but when he heard
that the police department's was faster, he got a more powerful one."

Sugar money has led to a real-estate boom here. The result is a row of posh,
high-rise condominiums that have altered the city's skyline.

"I bought a flat for $100,000 a few years ago; it's now worth $700,000," said
Eduardo Cunari, who grew up in the industry, owns a minority share with his
brothers in a sugar operation, and runs two John Deere farm-implement
dealerships in sugar cane-growing areas.

Ribeirao Preto became a sugar center because of its climate, rich soil (called
terra roxa or "purple earth"), ample rain and proximity to the port of Santos.

Starting around 1900, the region was heavily planted with coffee. Then the Great
Depression devastated the commodity's exports, Cunari said. Farm workers, many of
them immigrants from Italy and elsewhere, in some cases bought land from their
bankrupt former employers and planted sugar cane.

Eight large sugar families dominate the region, which enjoyed an exuberant boom
in the 1980s when the government paid heavy subsidies to encourage the
production of sugar-derived alcohol as a way to achieve energy independence
after the 1973 oil embargo.

Because of the concentrated wealth -- 10 percent of sugar growers control 60
percent of production -- and comfortable climate, Ribeirao Preto has been
nicknamed the "Brazilian California."

In 1975, the military regime of Gen. Ernesto Geisel mandated that gasoline be
mixed with ethanol, and it began funding research for ethanol-only cars. A
subsequent civilian government had the state oil company, Petrobras, carry
ethanol at all its service stations, and by the mid-1980s, about 90 percent of
new cars were running only on alcool, pronounced OWL-cool, Portuguese for
ethanol.

The big sugar families were less than loved when they suddenly stopped producing
ethanol in 1989 when wholesale ethanol prices dropped, making overseas sugar
orders more attractive. Most plants can switch between sugar and ethanol
production, depending on market conditions.

Hundreds of thousands of Brazilian motorists were left high and dry, unable to
buy fuel for their ethanol-only cars. More galling to the public was the fact
that the government had helped the sugar barons build their ethanol plants with
subsidized loans.

If the plants had produced ethanol at the time instead of sugar for export, "we
couldn't stay alive," asserted Norberto Bellodi, who runs a sprawling,
family-owned sugar and ethanol complex near Ribeirao Preto.

People by then had abandoned ethanol cars in droves, Cunari said. "I knew
doctors and dentists who had to leave their cars in the garage. They were very
angry and vowed never to buy another ethanol-fueled car again."

The market for such alternative-energy cars dried up until a Brazilian
engineering team created sensor software that takes a millisecond to calculate
changes in a car tank's fuel mixture, and allows the engine to burn ethanol or
gasoline. The software was adopted by Volkswagen in 2002, with other major
automakers in close pursuit. An estimated 1 million flex-fuel cars now operate
in Brazil, filling up at about 33,000 service stations that have at least one
100-percent ethanol pump.

Overall, 40 percent of the cars on Brazilian roads use ethanol. "Flex-fuel cars
restored consumer confidence, knowing they can choose," Cunari said over a
cup of espresso. "If the price of ethanol is good, they'll buy ethanol. If gasoline
is cheaper, then gas. If ethanol is 30 or 35 percent cheaper [than gas], everyone
will buy it."

By no means is ethanol the only reason behind Brazil's hard-won energy
independence. This year, Petrobras announced that its P-50 rig in the offshore
Campos Basin will help the company top 1.9 million barrels of oil a day, more
than Brazil's daily consumption of 1.85 million barrels.

The city of Ribeirao Preto has clearly benefited from the energy boom, as has
the trained staff at the sugar and ethanol plants. At Bellodi's Santa Adeilia plantation
and mill, surrounded by manicured grounds and neat bungalows for the staff, executives
enjoy catered lunches finished with coffee grown and roasted on site.

Even though the mill is booming, Bellodi bristles over government regulations
that require that he supply his cane cutters -- part-time contract laborers --
with hot midday meals served in dining tents out in the field. He said feeding
2,000 workers scattered in different areas of the plantation is a daily
logistical nightmare. Like other mill owners, he has weathered strikes in recent
years.

"They don't realize that there's an alternative now -- mechanized harvesting
equipment," he said in the presence of visitors, who included two John Deere
representatives who supply such machinery.

Cunari disagrees with the confrontational approach.

"We have to pass on some of the profits," Cunari said. "At my mill, we gave a
bonus to every cane-cutter last year, and we had no strike. (A 10 percent
bonus for motivation.)"

"If the mill is shut down by a strike, it costs $1 million to $2 million a day
in lost revenues," he said.

Aside from luxury spending, some sugar barons are selling their ethanol plants
to foreign multinationals and using the proceeds to build larger, more advanced
operations, Cunari said.

In July, sugar magnate Maurilio Biagi sold his seven-year-old mill to
Minneapolis-based Cargill and a Brazilian partner, "and he plans to build a more
efficient one," Cunari said.

Agribusiness multinationals like Bunge and Cargill seem to be showing more
interest in ethanol refining here than major oil companies. And foreign
investors like George Soros reportedly are among new investors.

Brazil's 300 ethanol plants will be joined by an additional 50 now under
construction. More are on the drawing board.

Even if the United States scraps a 54 percent tariff on imported ethanol, Brazil
has its hands full meeting demand domestically, Bellodi said.

The question rarely publicly asked is whether the current sugar boom is fragile.
Some wonder whether Ribeirao Preto's farmers, as in 1929, are becoming overly
reliant on a single crop with all its inherent risks. This spring, when demand
for ethanol outstripped supply, pump prices jumped 15 percent and people
switched to gasoline until prices slipped 20 percent.

In the meantime, some sugar barons have found that their holdings are so large
that they can be floated on the Sao Paulo stock exchange, Cunari said.

"They plan to retain control but have professional managers run the business.
They don't want to work anymore. They want to enjoy the good life -- airplanes,
yachts, homes on the beach, his and her helicopters," Cunari said.

"One of these big sugar people lives in the penthouse of my building. And he
brings a lot of problems, always worried someone's trying to rip him off or
kidnap him. At every meeting of residents, he demands security cameras,
around-the-clock guards. But he wants us to pay for it.

"Even though all of his cars are armored, hes now too afraid to drive to his
sugar mill.

"He goes by helicopter."